Steven Marien read musicology at the Universities of Louvain and Paris IV-Sorbonne, after which he studied singing at the   Lemmensinstitute. He took several masterclasses and didn't cease seeing his vocal coach on a regular basis. Steven teaches singing at de! Kunsthumaniora   (Antwerp).

Steven concentrates on baroque music – with a particular focus on Bach's evangelists – and on Benjamin Britten's repertory. He  is founder of Il Nostromo del Sogno.

Steven Marien sang Bach's passions and cantatas (though he still has some to go), the B-minormass and dealt with a bunch of Schütz and Monteverdi, quite some Benjamin Britten, Orff's Carmina Burana, both J.S. and C. Ph. E. Bach's Magnificats and cabaretmusic by Hans Eisler. He performed the  scenic leading role in Monteverdi's L’Orfeo and joined several other music theatre productions. With Ellen Schafraet he has been performing Dancer before God, a recitalprogramme drawing from eight centuries of music for tenor and harp. 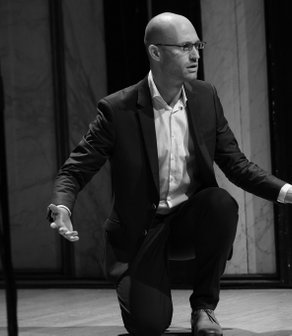